As I walk into the Brooklyn Airspace I find myself in a warehouse with tall ceilings and scaffolding. Immediately my eyes are drawn to long blue silks that hang from ceiling to floor. A young woman pulls herself up the fabric using just her arms, and I am unable to look away asshe intertwines her arms and legs and effortlessly twirls and untwirls. Suddenly she lets go- the silk quickly unravels as she shoots towards the ground, letting the fabric catch her at the last minute. 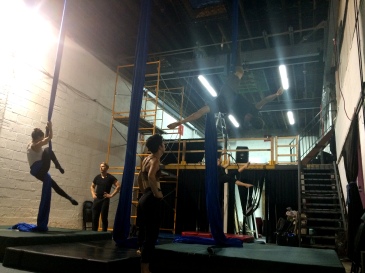 Rehearsing at the Brooklyn Airspace (photo by Maia Sacca-Schaeffer)

I have entered one of the rehearsals for “NOMA,” a wordless movement piece with aerial dance directed by Sara Zepezauer and choreographed by the Circus Solaris Collective. In it a little girl’s world exists solely on her canvas. When she steps away to look at her work, she is swept up again in her strokes, moving among the colors she combines. As the darkness within her starts to multiply and becomes more aggressive, black enters into her painting and it becomes increasingly clear that she is dying from something that is seductive, dangerous and growing at an exponential rate. In the midst of this consuming darkness, an uncontrollable force takes over her mind and body and it remains unclear until the very end whether this is a self-created reality or the driving force of her art. The work uses painting as a metaphor for the darkness that can overtake us in our futile flight from death, pairing concept with visual representation and using movement to emulate the strokes of a paintbrush.

Zepezauer says that a year ago she went through a difficult time and this show became a way for her to cope with what she was experiencing. She says the piece seeks to explore the “uncontrollable force a sickness can create when your body becomes a host to something you can’t control.” The darkness that overtakes the girl in the show is intentionally ambiguous and it is left for us to decide what fuels this darkness and whether it even exists. “NOMA” speaks to anyone who has endured or watched a loved one endure a darkness too overwhelming to control, too large to conquer and too seductive to resist.

There are three members of the ensemble at today’s rehearsal: Sara Zepezauer, Rachel Boyadjis and Emily Henrie. Zepezauer has always been a dancer, starting when she was two years old. But when a tragic accident at age 18 forced her to have knee surgery she thought her dance career was over. She revisited silks after the accident, making her tentative first climb again after six months of immobility. While she couldn’t stand or dance on the ground, dancing in the air was a different story. She made the move in 2011 from Los Angeles to New York City and continued doing aerial dance, directing her first show “The Secret Below” in 2014. She has been doing silks for nine years now. Boyadjis is Zepezauer’s performance partner, but her background is based in theater writing and performance. Thus she brings a different viewpoint to the process of creating “NOMA” and says she helps with developing ideas about how the different parts on stage interact with one another. Four years ago she decided to give silks a try and after going to a class was drawn to the way it allowed her to express herself with the same freedom and emotion she found through writing. Henrie is a gymnast and she will be doing a solo within the show involving tumbling, hand balancing, and line drawing with chalk. The variety of backgrounds and experiences each member brings allows for diverse techniques and styles within the show.

The dancers’ movements will be accompanied by an overhead projector creating a dynamic backdrop in which someone will be mixing and dropping paint on a tray of water in real time. This projection will serve as the inspiration for the dancers’ movements and guide their reactions, making each performance slightly different. Zepezauer says that the painting theme that shapes the piece stems from her being a very visual thinker who often draws things before making them real. She had drawn many of the ideas for “NOMA” previously and now feels ready and excited to bring them to life. The show will also feature music described as “sound sculptures,” where sounds are built up and distorted, deconstructed and reconstructed to create experimental patterns that interact with the movement in real time. “NOMA” encourages performers and audience members to enlist all the senses and be immersed in a world of sound, sculpture and movement.

The process for creating and rehearsing the visually complex and beautiful movements of “NOMA” involves improvisation and brainstorming, with the piece constantly evolving and developing. The Circus Solaris Collective choreographed the project and it is the first piece =they have produced. The group fosters a collaborative and supportive environment that enlists creative ideas and experimentation to create something powerful. Their rehearsal process is at times individual, for instance if one of them has a solo they might work on it on their own first and then seek feedback from the other members. While the creation process involves improv and testing ideas, Zepezauer says that once they find movements and images they like they become established as choreography within the show.

Watching Zepezauer and Boyadjis rehearse on the silks I am blown away. I am amazed at how fluid and seamless their movements are and how weightless they look as they glide up and down. They agree that aerial dance is extremely freeing, empowering them to create shapes and images in the air. Boyadjis says that the silks are based around the idea of tension, with the angle of the fabric responsible for keeping you safe. She says that silks have their own vocabulary and there are many types of wraps and knots. There are some climbs that only involve feet or only hands, and certain drops where you catch yourself or others where you don’t need to. She also describes “transition moves” that are necessary to unify the poses into a fluid story. Boyadjis enjoys the way silks involve a process of constantly building on what you have learned and also that they allow for personal stylization. Silks require upper body strength and flexibility, and Zepezauer says that doing handstands, planks and hand balancing are all essential to build up the “pushing and pulling vocabulary that keeps the balance.” Zepezauer says “NOMA” is best described as a movement show and that aerial is just a piece of its larger framework, with each component flowing seamlessly so that no one part is more important in telling the story than another.

“NOMA” transports us into a new world and puts us into the body of a girl whose fight against darkness becomes our fight, constantly making us question whether that girl on stage is in fact us. Zepezauer says that while “NOMA” is based on a deeply personal experience she hopes that every member of the audience can relate it to their lives and experiences and find their own meaning in the movements, thus integrating each of us into its story.

Theater for the New City’s Dream Up Festival will present the American premiere of “NOMA” September 9 to 19 at the Johnson Theater.